I advise you to do the Via del Sale – The Via del Mare in 4 days as well described on this always updated page (I live in Uscio), and the free map can be used from my website. Via del sale in Lombardia and Via del Mare ( VM) in Liguria, is our ancient path that unites 4 provinces (Ge, Pc, Pv, Al) .This route therefore proposes the classic itinerary from Varzi to Portofino Park, for a dip in the clean, deep sea at Punta Chiappa ) full of fish that do not run away, after 80 years of Park, the fish do not fear us anymore! wearing a mask weighs little.

maintained and managed by the Lombardy region, it starts in the heart of the town of Varzi, in the province of Pavia, easily reachable from Pavia by bus, so you avoid going unnecessarily with your own means for a true eco-sustainable tourism. (40 min )

We recommend sleeping in Varzi as the first stage includes 8 hours of walking so as to leave early in the morning (departure at 8 am) I recommend the B&B La Corte di Nando a stone house, excellent hospitality by Renato www.lacortedinando. it

From the parking lot overlooking the Staffora, follow the signs in the direction of the bridge, then the path on the left. A wide path, first flat, then of variable slope, will accompany you to Monteforte and then to Castellaro, periodically intersecting the asphalted provincial road and the local cart track.
At the end of the town, continue on a wide dirt road surrounded by woods until you meet the border between Lombardy and Piedmont. On the border line continue on the ridge that will accompany us up to the 1700m of Monte Chiappo, where at the bar / refuge it is possible to refresh yourself before the descent to Capanne di Cosola (province of Alessandria, Piedmontese cuisine) or to Capannette di Pey where a large historic hotel will welcome (Carlo with his wife are really super kind) with excellent Piacenza cuisine Hotel Capannette di Pey, www.capannettedipei.it province of Piacenza, Piacenza cuisine.

The second day of walking begins along another border: the one between Piedmont and Emilia, initially slightly downhill, first in a wooded area, then on the ridge that looks to the underlying pastures in a southerly direction. Once past Monte Cavallaro and Carmo, the path continues on the dividing line between Liguria and Piedmont within the Antola park.

Reached the top of the mountain, after a stop at the Antola refuge, a beautiful farmstead continues steeply downhill towards Donetta and then Torriglia, where you can stay overnight and take a nice tour in the village where I recommend you buy the famous canestrelli. Recommended the Rifugio Antola before Torriglia, so you can go to the summit of Mount Antola, the highest mountain in the province of Genoa www.rifugioantola.com, while the B&B Villa Tiffany (Porto location) www.villatiffany.it is for a stay more romantic, right on the beautiful lake of Brugneto in the heart of the Antola Park, in liberty style.

On the third day, after walking along the provincial road that leaves Torriglia, go through the Buffalora tunnel
Monte Lavagnola. When you are on the hill of Monte Lavagnola, you have to go RIGHT towards the Scoffera pass and always follow the AVML path marked with the initials AVML, when the path forks, take the left that goes down the one marked VM (Via del Mare). the directions VM or blue points for Sant ‘Allberto di Bargagli and, at the ROSABRUNA restaurant, follow the directions for the path with the new VM aluminum trail signs with blue writing on a white background. then once arrived in Colle del Bado, 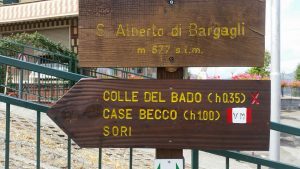 do not be influenced by strange written with an X that lead you out of the Via del Mare (I don’t know who it is but someone tries to make the walkers go to the Madonna del Bosco and then to Pannesi which has nothing to do with the VM. made a trail with the bikes and they left the wrong trail signs do not follow them because ONLY the FIE is authorized has signaled the true VM path which means the way of the sea, in fact from Case Becco you are right at the top of the Golfo Paradiso with mega sea view!

Always follow for Case Becco, always VM and here is the view! 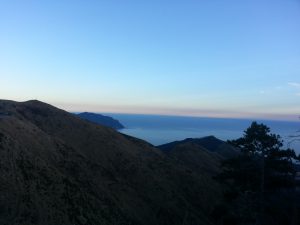 DO NOT GO TO PANNESI which does not center with the Via del Mare, it is a village that is in Valfontanabuona, not in Golfo Paradiso and this path that goes to Pannesi will no longer be maintained because the CAI and the FIE will keep the VM path clean Official.

the path is not sea view, on the contrary, it is in a dense forest with little sun. certainly not panoramic!

At Case Becco, always follow the signs VM Once you arrive in Colle Caprile you have to take the path that you meet going left, with the new sign VM

From B&B Uscio, follow the 3 red dot trail signs and the VM signs right at the exit of the B&B Rif.Uscio. Follow all the new trail signs, you will reach Colonia Arnaldi, continue and always follow the VM signs and you will arrive at the Passo Spinarola, Dal Passo Spinarola, new signage of the Park of Portofino with signs and new trail signs! Always Staying on our track, the VM path winds through the woods and you arrive at Passo del Gallo, from where you can see the two gulfs: Rapallo on the left and Recco on the right. The path continues without any problem, it is easy and well signposted up to the junction that separates the road for Ruta di Camogli indicated with VM from that for Recco. (A triangle)
Shortly after you arrive on the paved road and take a left to reach Ruta.You arrive in the center in 10 min and climb the steps of the church of Ruta and VM path becomes Ruta-San Fruttuoso, a wonderful and easy path (starting from Ruta and not from Ran Rocco which is more demanding) and you enter the Park Of Portofino. From there to the summit of Monte di Portofino, then easily go down to Pietre Strette and then to Portofino or San Fruttuoso, where the clear water of the Parco will welcome you for a refreshing dip in the blue.Recommended return by train from Camogli, Santa Margherita, Recco. 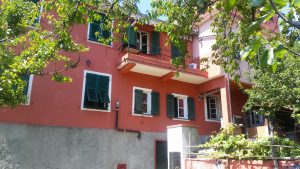